We'll find and remove it for you.

From Takedown Piracy, the leaders in Anti-Piracy

ClipSentry continues the mission Takedown Piracy started 10 years ago, which is to protect the adult industry from digital piracy. We recognize that the Adult Industry is rapidly changing, with more and more adult models, actresses, and cam performers shooting and producing their own content. We've taken our proven methods and technology that we use for studios, and tailored them specifically for independent artists at an affordable rate. We work directly with you to digitally fingerprint your video content, so that we can find and detect it with the largest Content ID system in the industry. Once we find where your content is being pirated, we'll work tirelessly to get it removed.

We use an automated visual Content Identification System that scans over 100+ adult tube sites for stolen clips, so that pirated content can be found and removed immediately. We have the largest anti-piracy tube coverage in the industry due to the unique design of our system (no tube site integration required). To-date, we have removed over 3.5 million pirated scenes and clips for our customers, and have wrecked pirate communities across the web.

Designed for models, artists, and independent producers who shoot and produce their own content

We provide free consultations, and make setup as easy as possible 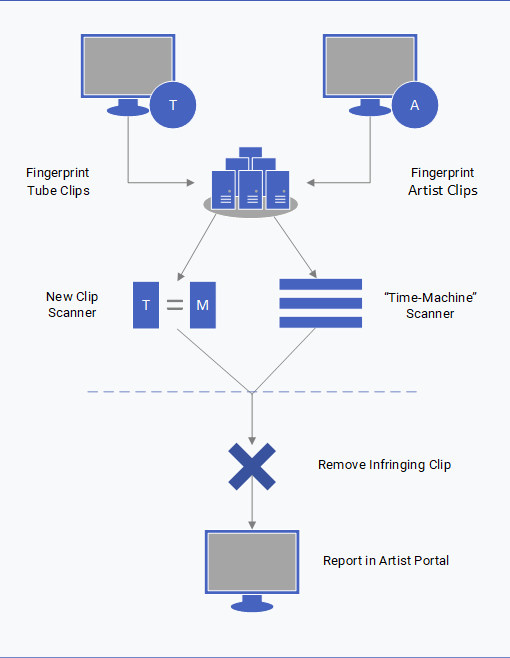 Takedown Piracy is the leading anti-piracy service in the Adult Industry and works with some of the largest adult production studios in the world. We are experts in DMCA takedown and are not afraid to use any means necessary to get a site to comply with our takedown requests. We ensure that sites truly comply with a takedown request in a timely fashion, that they follow a “a repeat infringer” policy, and that they do not use illegal practices such as re-uploads or uploads from fake/system users. For sites that do not comply, we have developed effective strategies for dealing with them over the years.

We developed our Content ID system based on lessons learned from an industry program launched years ago that relied on tube/streaming video sites being “partners” (FSC-APAP). This partnership required the tube site to load and integrate the Content ID software and fingerprint database directly into their systems, while giving the tube site operator complete control of how, when, and where it was run. This system was only adopted by a few large tube sites who already fully and rapidly responded to DMCA requests, so it's effects were marginal at best, and it never really gained traction. It's no surprise that most tube sites have zero interest in installing software that will greatly limit their revenues, so it never really caught on. There are some competing services that follow a similar site-integration/Content ID model as APAP, and try to make up for it's short-comings by using keyword search scripts (which pirates already know how to easily defeat). Also no surprise, these services are having only slightly better results than APAP.

Visual Content ID is the most effective method in finding and identifying pirated clips on tube sites - but it must work on a wide population of tube/streaming sites and not be limited to a partnership (we support the most sites in the industry and by a wide margin). We designed our system from the ground up to run completely independent – we build scanners for each individual site that we monitor that allows us pull and scan streaming video content, just like we were a user of the site. This allows us to rapidly take on new sites as their traffic rises and they become a threat, while not being blocked from seeing the “whole picture” of the piracy taking place. This gives us a big and fast whack-a-mole hammer that has massive coverage - and it works.

To date, our Content ID system has visually scanned over 150 million videos (approx. 1 million per month), and has identified the copyright holder for 1 out of every 4 of those clips. We use advanced algorithms and AI techniques to counteract visual distortions, clipping, cropping, low sample rates, and other tactics pirates use that allow them to get past most other Content ID systems. Our system also stores the digital fingerprints for every clip we scan, effectively creating a digital record, which allows us to go “back in time” and find older hits as we add new source fingerprints – we are the only service that does this.

Got questions? We have an answer.

Here is a list of answers to frequently asked questions about ClipSentry. If you have a question not in the list, send it our way through our contact form.

Reach out to us either through the Contact Form, or reach out to reba@takedownpiracy.com to get started with us.

How much does it cost?

Our rates are $100.00 for the first month, and then after that, we bill based on the number of clips you've uploaded:

Digital Fingerprints are tiny bits of data pulled from a video using a set of special forensic techniques. Our system will automatically pull these fingerprints from your clips and then load them into our Content ID system. The Content ID system will then scan through every tube video that we've ever checked, and look for videos that contain the same digital fingerprints as your clips. When the system detects a match, a "hit" is recorded, and sent to our anti-piracy specialists for review. If we find that the hit is valid, we then issue a DMCA Takedown request on your behalf.

There's no such thing as "eliminating piracy", so why bother?

You're right in that piracy can't be completely eliminated, but it can be effectively managed. We have countless testimonials from studios who saw an increase in sales and member sign-ups shortly after using our service. If you don't pay attention to piracy, it will eat at your revenues and de-value your brand.

If you still have unanswered questions, please contact us.